Patenting Simulations - Is Making it More Real the Key?

It is a long time since I last got into the issue of software patents (a.k.a. computer-implemented inventions, CIIs) at the EPO. The last major event on this front was when the decision of the Enlarged Board in G 3/08 issued in May 2010, which I wrote about for the IPKat here. The decision did not, however, change the law in any respect because the referral, made by the EPO President, was decided by the EB to be inadmissible (which I, along with others, predicted would happen). There was, at the time, apparently no contradictions in the case law from the Boards of Appeal on the subject of CIIs, with the leading case being Comvik (T 641/00). Since then, the law has been remarkably stable, with no significant divergence or change of direction. The established law in the UK has also been pretty stable. In 2013 I summarised the main features and differences between the UK and EPO approaches here. Nothing much has changed since then.
The decision in T 489/14, however, issued in February 2019, attempted to put the cat among the pigeons in the field of CIIs by questioning whether the development of the case law in T 1227/05 (Infineon) was correct, or at least to what extent. As a quick reminder, the cases leading up to T 1227/05 involved methods of designing things such as integrated circuits and drill bits, with big players IBM and Halliburton respectively leading the way. There was initially resistance to patenting methods of designing things but, as the case law developed, both the EPO and the UK courts decided that in some cases it was possible to patent a method of designing without having to tie it to actually making the thing. This was expected to be of help to companies involved heavily in designing complex products but where the article being designed would be manufactured by others. The decision in T 1227/05 then went further and established that it was in principle possible to patent a method of simulating an article (in this case an electronic circuit), provided the invention was limited to that specific purpose. It was not necessary to include fabricating the article itself because specific computer-implemented simulations were themselves to be regarded as patentable and not dismissed as non-inventions for being mere computer programs. 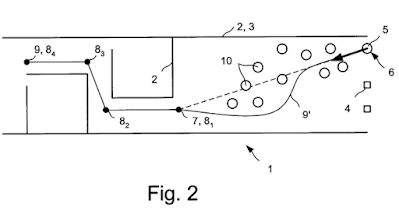 The application leading to T 489/14 also related to a simulation method, but in this case related to simulating movement of people in a building, rather than electrons in a circuit. Figure 2 shown here shows people moving along a corridor and taking steps according to factors such as whether there was something in the way (e.g. another person or an obstacle). The application was refused because it was considered to be obvious over a general purpose computer, following the usual practice in T 641/00, although the application did cite prior art relating to previous techniques for modelling pedestrian flow in buildings. The applicant appealed, and argued that the aspects of the simulation that were based on human behaviour were modelled by equations similar to those describing the laws of physics and the application should be patentable for similar reasons as in T 1227/05. The Board saw that the applicant had a good argument but was still reluctant to allow the appeal because the simulation only assisted an engineer in the cognitive process of designing something, whether this was a circuit or a building. Instead of following T 1227/05, the Board decided that they would rather ask the Enlarged Board whether simulation methods were actually patentable. The questions put before the EB were:

2. If the answer to the first question is yes, what are the relevant criteria for assessing whether a computer-implemented simulation claimed as such solves a technical problem? In particular, is it a sufficient condition that the simulation is based, at least in part, on technical principles underlying the simulated system or process?

3. What are the answers to the first and second questions if the computer-implemented simulation is claimed as part of a design process, in particular for verifying a design?

The oral proceedings in G 1/19 were held yesterday (15 July 2020), attended in person by the Enlarged Board, the applicant's representative and representatives of the EPO President. I, along with an unknown number of others, attended virtually via a video stream. The proceedings were not particularly enlightening regarding the thinking of the EB, but we did at least get an idea that they thought question 1 was at least admissible, while there might be some doubt about whether question 2 was. The appellant, of course, argued that the bounds of what was patentable should be maintained as in T 1227/05 and should cover modelling pedestrians in buildings as well as electrons in circuits. The EPO President seemed to agree, and argued that methods of simulation were becoming increasingly important and in some cases provided alternative ways to taking measurements in the real world. The boundaries of what was considered patentable should therefore be allowed to develop over time. The only significant push back from the EB seemed to be to emphasise that they were the ones who were to decide whether any question was admissible. Just because they were asked a question did not mean that they were obliged to answer it (as of course we already know from G 3/08).
An interesting example put forward by the EPO President was a method of simulating natural phenomena by ray tracing, in order to generate a more realistic image. Computer rendering by ray tracing could be considered patentable because it allowed for a more realistic representation of reality, even though the output was not actually real. This made me think that this is, in essence, the problem relating to the issue of whether computer simulations are patentable or not. What exactly is it about a particular computer simulation that would make it patentable? Is it to do with the type of thing that the simulation models, i.e. whether the thing is an electronic circuit or movement of people in a building? Both, of course, are real physical things and it is possible to get patents for buildings as well as for circuits. That can't be it then. Instead, looking back at why the application in T 1227/05 was considered allowable, the reason for allowing it was, in my view, to do more with the way in which the circuit was simulated that allowed a more realistic representation of noise. A link between the simulation features and the corresponding article in the real world could be established, resulting in a plausible reason for establishing an inventive step. In the case of modelling pedestrian flow in a building, however, even though the argument was made that the way the flow was modelled made the simulation more accurate, this seemed to be a mere assertion without any real backing. More, I think, could have been made about why the particular way the flow was modelled made it more accurate, backed up with evidence as to how this was the case. This was not possible on the basis of the original application, which contains lots of detail about how the model is set up but nothing about how the resulting simulation matched reality. With a circuit this could easily be done. This could also have been done with real people in a real building (or at least a corridor with obstacles, as in the above drawing) but it wasn't. Could it have made the patent application more likely to be granted? I think perhaps it could, but then we wouldn't have had the opportunity to have the Enlarged Board consider the issue.
While the EB is deliberating, we will for now just have to guess what they think about the issue. Having heard the arguments, however, I think that the key to getting a computer simulation patentable is to show in the application how the way in which the simulation is set up produces a result that is closer to reality. Whether this is the way in which 1/f noise is simulated using random number to model a circuit, how light rays are traced to produce more realistic images or the way in which people are modelled by way of various parameters, it should be possible to show how certain specific features of the claimed invention provide a more realistic representation of reality. That way, I think, is where the path lies in getting simulation methods patented. Whether I am right or not we will just have to wait and see.
PS. A prize for anyone who can spot what word I have deliberately avoided using (with the exception of the quote from T489/14) in this post. Is it any less clear as a result?
Posted by Tufty the Cat at 16:07

Email ThisBlogThis!Share to TwitterShare to FacebookShare to Pinterest
Labels: G 1/19