It is not always pleasant to see your work criticised in public, but when it comes to patent litigation someone somewhere has to bear the responsibility for writing the patent application in the first place. Courts are usually able to work around minor issues such as clarity by construing claims according to how Lord Hoffmann put it in Kirin Amgen, i.e. what would the skilled person have understood the patentee to have used the language of the claim to mean. As part of this process, when the claimed invention includes various specific features one cannot simply ignore some of them and interpret the invention to be broader than it is.


The case of Schütz v Werit, recently decided at the UK Supreme Court, is not one of those occasions where overly narrow claims resulted in a patent not being infringed. Very oddly, the situation was quite the reverse before the Supreme Court's decision. By having claims that were, according to all conventional patent attorney training, far too narrow, the patent proprietor very nearly got away with a much better result than they would have had their patent application been drafted properly. By 'properly', I mean that claim 1 should ideally have had only those features that were essential to the definition of the invention. How could this have been the case, and how could such a decision make any kind of sense? 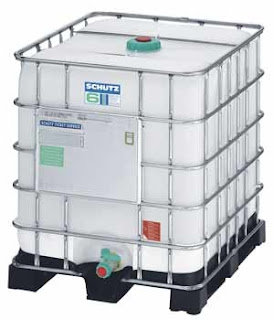 Going back to the start of the story in the UK, Schütz (U.K.) Limited, an exclusive licensee of European patent 0734967, sued Werit UK Limited for infringement of the patent. There were other issues involved, but the main one for the purposes of this story is that Werit were alleged to infringe the patent by making the patented product, which was a palletised Intermediate Bulk Container (IBC) comprising a plastic bottle in a metal cage on a pallet (like the one shown on the right). Werit were taking used IBCs, taking out the plastic bottle and replacing it with a new one. Schütz claimed that this infringed their patent, because it was more than repairing the product but constituted making it anew. At the High Court, Floyd J was having none of this, and decided that Werit were not infringing the patent because the inventive concept of the patent was wholly embodied in the cage, which Werit did not do anything with other than repair (see paragraph 206 of Floyd J's judgment).

At the Court of Appeal, things turned out quite differently. Jacob LJ, taking the leading role, decided that the inventive concept test was wrong, and that Werit were making the patented product because they were making anew the palletised container of the claimed invention. This decision has now been overturned by the Supreme Court, which has effectively reinstated Floyd J's decision, although with some reservations about the inventive concept test not being the only one to consider (the main reasons being provided on paragraph 78 of the judgment).

As summarised by Lord Neuberger (at paragraph 10), the inventiveness of the patent lay in the idea of flexible weld joints in the cage to increase its strength and durability and, more specifically, in the idea of introducing a dimple on either side of each weld and a central raised portion where the weld is located. This is shown in figures 2 and 7 of the patent (shown below), figure 2 showing a portion of one of the metal tubes forming the cage and figure 7 a cross section of a welded joint between two of the tubes. The tubes were joined with welds at a raised portion 17, with recesses 25, 26 provided on either side of the raised portion 17. According to paragraph 3 of the patent (roughly translated), this configuration would increase the durability of the weld joints at the intersection of the vertical and horizontal bars of the lattice sleeve of the pallet container arising from static and dynamic loads during operation, thereby improving the stacking and transport security of the container. 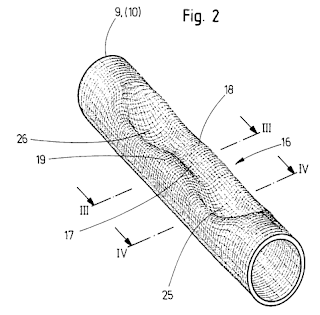 The patent is not a long document (consisting of 7 pages of text and 3 of drawings in the application as filed; see the EPO register for all the details), and concentrates on the particular form of joints between the horizontal and vertical bars of the cage. The description makes clear that the object of the invention is to improve these joints. Claim 1 of the patent, in line with normal German and EPO practice, includes a characterising clause (“dadurch gekennzeichnet” / “characterised in that”), the meaning of which is clear: the combination of features prior to the characterising clause are known from the prior art, making the inventive concept the bit after the characterising clause.

Claim 1 of the patent (which is unchanged from that as filed except for the inclusion of reference numerals and some minor other changes by the examiner) does not, as a competent patent attorney might expect, claim only the cage but claims the whole pallet container, i.e. a pallet, an exchangeable plastic container for holding liquid, as well as the cage itself. The English version of claim 1 of the patent as approved by the applicant, reads as follows:

In my view, if this claim were to be submitted as part of an answer to a patent drafting paper at the EQEs or the UK finals, the candidate would suffer a loss of many marks due to the unnecessary inclusion of features unrelated to the invention, i.e. the pallet and the inner container, as well as other marks due to the lack of  overall clarity of the claim, and would probably fail the exam as a result. However, in the strange world of patent litigation, and in particular the even stranger world inhabited by Lord Justice Jacob, the resulting patent was stronger for what the proprietor wanted to use it for than it would have been if it had been drafted properly. It is certainly possible to imagine how the claim might look if it had been drafted to concentrate only on the features essential for defining the inventive concept. Leaving mostly aside the fairly clunky wording, claim 1 re-drafted accordingly would read something like:

It is perfectly clear where the inventive concept lies in the above claim, which is in the construction of the lattice sleeve and not with the other components of the IBC, which are not claimed. I see no reason why this claim could not have been allowed by the EPO. The question is then whether the same decision would have been arrived at by the Court of Appeal. I think not, because it would be hard to argue that the inventive concept could lie outside the scope of a claim (although the claimant would probably have done anyway). In rejecting the "whole inventive concept" test (see paragraph 72 of the Court of Appeal judgment), Jacob LJ had clearly not looked very hard at the actual patent. If he had, it would have been clear that the inventive concept could not have lay outside the cage, and had nothing to do with the other components of the IBC. It was not "fuzzy and uncertain", as claimed, but the wording of the patent made it quite clear that the feature to be concentrated on lay in the cage and not elsewhere. The fact that the cage in practice operated in conjunction with the bottle, with the improved weld allowing for more flexibility, may have been a factor in considering whether the skilled person would consider the feature obvious, for example when trying to solve a problem relating to IBCs as a whole, but this lay in deciding whether the invention was obvious, not in where the inventive concept lay. It was certainly quite wrong to view the solution to any problem as having anything to do with a component outside the cage, and in particular the welded joints making up the latticework of the cage.

If the Court of Appeal decision had not been overturned, I wonder how far the rejection of the whole inventive concept test would go. Would it be possible for a claim to a car comprising a new and inventive cigarette lighter to have a better scope for protecting against infringers than a claim to the cigarette lighter alone? Perhaps things would not be taken to that extreme, but it might have made claim drafting for UK patent applications more complicated if such an illogical decision had to be taken into account. Thankfully we do not have to, and can carry on drafting patent claims in the way we were taught to.