An Analysis of TKDL at the EPO

Following my recent post on the IPKat here about (at least partly) false claims made by the Indian government regarding the relevance of the Traditional Knowledge Digital Library (TKDL), I thought I would have a good look at a bigger sample of the recent claims that have been made. These are listed on the TKDL website here as 'major milestones'. Another list is available here on the TKDL website indicating all instances where the TKDL has been used in third party observations, but without any claims to the relevance of the observations.

The major milestones page claims that things have happened, such as applications being refused or withdrawn, "based on the TKDL evidences". Based on the cases I have seen so far, these claims have turned out not to be true. The recent announcement by the Indian government to have "foiled an attempt by consumer goods giant Colgate-Palmolive to patent a mouthwash formula containing herb extract by citing ancient texts that show it was traditionally used in ancient medicinal practices" was just one recent example, as I showed in my recent post.

I wondered whether there had been any cases where the TKDL had been actually relevant in determining the outcome of an application. The only way to find out was to look at each of the cases and see what actually happened. The table below, which is derived from the TKDL's own list, shows for each European application in the list a summary of what happened, and whether the claim is true or false (or perhaps somewhere inbetween). You don't need to take my word for it though, as links are provided in each case for verification if needed.

Where I have indicated that the TKDL claim is false, this is based on there being no objections raised by the examiner in relation to the TKDL documents or, in some cases, that the examiner has specifically stated that the references were not as relevant as those already cited, and therefore could not possibly have made any difference. Where I have indicated that the claim is true, this is where either the examiner has specifically raised objections and/or the applicant has responded to the references by amendment. Whether any subsequent deemed withdrawal has anything to do with the TKDL citations is, of course, unknown, but I have given the TKDL the benefit of any doubt where any objections have been raised during prosecution.


Out of a total of 23 cases where a claim has been made that something happened "based on the TKDL evidences", 15 turn out to be completely false. There are no cases where an application has been refused based on TKDL evidence, but several where an application has lapsed for one reason or another after TKDL evidence has been submitted. It looks to me like the TKDL is a potentially useful source of prior art in limited circumstances, but is nowhere near as significant as it is made out to be. Perhaps the Indian government could be a little more honest and make claims where they are actually justified.
Posted by Tufty the Cat at 15:54 No comments:

Don't let your patent go up in smoke

Renewal fees are payable to the UK IPO on GB and EP(UK) patents each year, by the end of the month in which the anniversary of the filing date falls (rule 37). If this is missed, an extra six months is allowed for paying the fee, with surcharge (section 25(4)). If, after this period passes, the renewal fee is still not paid the patent lapses. It is possible to have such a lapsed patent restored, but only if it can be shown that the proprietor unintentionally failed to pay the fee (section 28). This is usually a fairly low hurdle to get over, and it is quite common for proprietors to be able to get their lapsed patents restored provided they can show that there was an underlying intention to keep it. An important point to note, however, is that although anyone can pay a renewal fee it is the proprietor who must be shown to have the intention to pay. 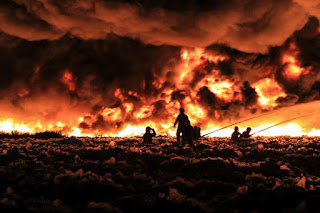 EP1409166, relating to processing of waste material, and originally applied for in the name of Strumat Limited, was granted to Globally Greener Solutions Limited in 2010, after recordal of a transfer was made during prosecution. The patent then lapsed in the UK due to failure to pay the renewal fee that was due by the end of July 2012. Unfortunately, as it turns out, the transfer to GGSL was apparently made by one of the directors of Strumat without the permission of the others. Following dissolution of GGSL, which seems to be connected to a large fire at their premises involving 5000 tonnes of stockpiled waste material, and which resulted in two of GGSL's directors being jailed for failure to comply with environmental regulations, ownership of GGSL's assets passed to the Crown, under section 1012 of the Companies Act 2006. As an aside, very large fires at recycling plants seem to have been quite a common occurrence recently, a few examples being in Linconshire, Salford, Wrexham, Rainham, Swindon, Melton and Smethwick (the large plume of smoke from which was visible from my office).

To return to the issue in question, since the Crown was the proprietor at the time the patent could have been renewed, on the face of it the intention that would count regarding whether the patent could be renewed would be theirs. Unfortunately, the Crown makes no effort to maintain patents that are acquired as a result of them being bona vacantia, so the intention test would never be met. This was clearly a problem for Strumat, who claimed that the application had been transferred fraudulently and should therefore never have been recorded as being in the name of GGSL. They applied under section 37 to have the question of entitlement resolved by the comptroller, but the comptroller declined to deal with the issue (see the decision here), as it was one that related only to non-patent law issues. Strumat then went to Court, and were granted a Vesting Order which ordered:


“the Patent Number EP02747559 granted as EP1409166 be and is hereby vested in Strumat Limited for all the estate and interest therein which immediately prior to its dissolution were vested in Globally Greener Solutions Limited”.

Strumat argued in their application for restoration that this meant they had always been the proprietor and it was therefore their intention to maintain the patent that counted. The hearing officer disagreed because it was quite clear that the order took effect as of its date, and was not retrospective. As a result, only the intention of the Crown could be relevant, and they had no intention to maintain the patent. The application for restoration therefore had to be refused (see decision BL O/248/15).

The case is quite an unusual one, but does suggest at least one lesson to be learned, which is to keep an eye on your own patents if they are important to you. If the issue had been spotted earlier, which it could easily have been (the transfer took place in 2007, long before the patent was granted), the patent might have survived. Getting others to look after them might save you some time and effort, but it's always worth doing a quick check now and then to make sure your patent is not about to spontaneously combust.