The UK IPO recently announced in their IPO Facto blog (archive version here) the "2.5 Millionth Patent!", on the occasion of publication of GB2500000. The IPO have also added it to their history section here, and the story has been picked up here, here, here, here, here and here. The immediate impression that any reader might get from this is that 2.5 million patents have now been granted since the Patent Office started. Great, you might think, and a vindication of the inventiveness of UK inventors punching far above their weight. After all, the much bigger USA only passed the 8 million mark a couple of years ago.

This impression would, unfortunately, be completely false. The Patent Office has not granted 2.5 million patents. It has, however, published 2.5 million patent applications (for the time being let's ignore what happened prior to the 1977 Act*). This is a very different thing. Under UK patent law, every patent application in the UK has to first be published before it is granted, unlike in the US where a patent number is only given once a patent issues. UK applications are, once a search has been done, first given a publication number ending in 'A', which is currently what GB2500000A is, and normally published 18 months after the earliest priority date. Only once the application has been through examination can it be granted. The same number is then used for publication of the granted patent, but with a 'B' at the end instead.

Given that not all patent applications proceed to grant, there will certainly be a lot fewer than 2.5 million patents granted by the UK Patent Office. I don't have the figures easily to hand (does anyone know?), but I would hazard a guess that the number will probably be somewhere around half to two thirds of that. There might have been two million patents granted, but I doubt it has got quite that far yet.

I should say, in case anyone is thinking I am being overly negative, that I think the invention defined in GB2500000 seems pretty neat. The application describes a monitoring method using microwaves, where electrically conductive fibres embedded in fabric are used to generate signals by reflection of microwave radiation. This could, the application says, be used for remote monitoring of personnel in hazardous environments, for patient monitoring or for monitoring athletes during training or performance. Very clever (if it actually works, of course). The search results look pretty promising too, with only citations of background relevance. If the applicant, Liverpool John Moores University, can overcome the various clarity objections raised by the examiner, it looks like they would be able to get themselves a granted patent. This will, however, not happen until after 11 December 2013, and it certainly won't be the 2.5 millionth UK patent.

*UPDATE 4/10/13: There is an interesting quirk here, for those interested in what happened before the 1977 Act came in. Since numbering restarted at GB2000001 under the 1977 Act (as mentioned in the IPO's history section), there are quite a lot of numbers that were not used, leaving a hole of nearly 400,000 that has not been filled. The total number of GB applications published is therefore at most about 2,100,000.
Posted by Tufty the Cat at 13:56 2 comments: 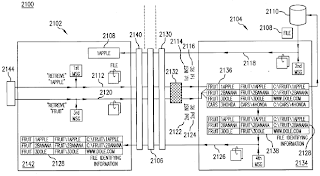