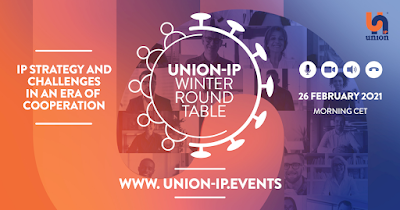 The Union IP Roundtable, held annually towards the end of February, is a regular feature in my calendar. In previous years I have attended the meeting at the DPMA in Munich to hear discussions of various topics relevant to patent practitioners across Europe. I attended my first one as a speaker, presenting my ideas on partial priority a little while before the Enlarged Board of the EPO agreed with me. Since then, topics have covered "Smart IP", literal and non-literal infringement, and indirect infringement. The topics and speakers are always carefully chosen to encourage a range of views from different European jurisdictions, which often highlight the differences that still exist in the patent world across Europe, despite extensive harmonisation over the past few decades.

The topic for this year's roundtable relates to the one thing it has been impossible to avoid for the past 12 months or so. The title is "IP strategy and challenges in an era of cooperation", which in essence is about what we can do in response to new challenges such as Covid-19 and how IP can help (or possibly hinder). Two main topics will be covered: how governments can balance patent rights and public health (e.g. crown use provisions and when they should be used), and whether or not to patent in the age of Covid-19 (e.g. whether it is acceptable to patent treatments to protect public health). I have my own views on these subjects, but I will certainly be interested to hear what others have to say.

As with everything else these days, the meeting will be held entirely online, so there is no excuse not to go this time. The registration fees are consequently lower than normal, being only 20 Euros for Union members and 80 for non-members. Registration is required by 25 February 2021, so book your place now.

Craig Wright is, to put it mildly, a controversial character. I will not go into the details why, as others have done this in much more detail (see for example Arthur van Pelt's website). It is sufficient to say here that Mr Wright has claimed, and continues to claim, to be Satoshi Nakamoto, the pseudonymous creator of Bitcoin. His claims are at best dubious and are very much contested. For what it is worth, in my opinion it is abundantly clear that he is definitely not Satoshi Nakamoto. The consequences of this, which are many, have yet to be fully worked out.

Despite not being able to prove that he is who he says he is, Mr Wright has over the past few years managed to build up, via the company nChain Holdings Limited in which he plays a key role, what is now a very substantial portfolio of patent applications. On 1 February 2017, nChain started filing GB patent applications. The total number of GB applications filed in the name of nChain now stands at 290, the latest being filed on 23 December 2020. There are also a further 73 applications, all filed in 2016 in the name of EITC Holdings Limited, which have since been assigned to nChain. These applications, which invariably do not progress beyond the first 12 months in the UK, have been used as priority claims for subsequent PCT, EP, US, CN and other applications. The current state of the patent portfolio is consequently now absolutely massive and clearly represents an investment amounting to many millions of whatever fiat currency you choose to use. For a small company based in London (but registered in Antigua), this is an enormous effort, making it very much an outlier in the patent world.

To summarise the entire portfolio would be a task that is far beyond my limited abilities and available time, let alone my readers' attention span. Instead, I will just concentrate on what nChain has managed to achieve so far at the European Patent Office, which Mr Wright has acknowledged is the toughest one to get applications past. It is still relatively early days, given that we are only a few years from the earliest filing dates, but there have already been some successes. A spreadsheet I have created, which is available here, lists all European patents that have been granted to nChain to date (updated as of September 2022). None of the patents has been opposed. An interesting point to note is that all of them are very much computer-implemented and presumably rely on the EPO's established view that applications of cryptography are very much within the allowable area of patentability.

Given the controversy around nChain and Mr Wright (see here), the fact that their patents have so far attracted no serious attention seems surprising to me. From my limited research so far, there is certainly the possibility that some (see for example here) may be invalid, although it is also possible that the technical relevance of nChain's patents is simply too low to be significant. However, given the huge investment so far, it would be surprising if nChain did not intend to use their patents in some way, otherwise it would be an awful lot of money to spend on what many would consider to be a narcissistic and possibly fraudulent vanity project. It would be interesting to see what others think of it, in particular if there is any relevant prior art on the granted patents that the EPO have not considered.

Update 6-10 Feb 2021: In light of the comments received so far by devoted followers of Mr Wright, I would like to add that it is very easy to verify ownership of any particular bitcoin address. Here's an example:

I, Tufty Sylvestris, confirm that I am the owner of the following address.

Anyone can verify this unambiguously, for example by plugging the text, address and signature into a bitcoin wallet verification tool (e.g. Electrum, which I use). Craig Wright has not been able to do this for any address containing coins owned by Satoshi Nakamoto (e.g. the single address mentioned in block 0, which was definitely owned by Satoshi, who should therefore have the corresponding private key enabling the address to be signed). Therefore Craig Wright's claims to be Satoshi Nakamoto can be discounted. Hitchen's razor applies.