Once enmeshed in a patent dispute, it can be very difficult to extract yourself from it, even if the validity of the patent in question is illusory and you only admit to making the tea and doing a bit of light stapling rather than infringing the patent. This is something that all of the parties are in the process of finding out in the case of Musion Systems Ltd v Activ8 -3d Ltd & Ors, an interim decision relating to which was recently handed down by HHJ Birss in the Patents County Court. 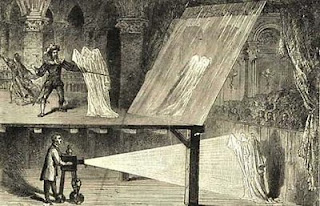 The patent in question, GB2427708, related to a variation on a very old trick known as 'Pepper's Ghost', the principle of which dates back to Victorian times. The variation claimed in the patent related to a way of generating an illusion by projecting an image on an inclined and tensioned transparent screen (rather like in the picture shown on the right).  The patentee, Musion Systems, alleged that the four defendants, which included their rivals Activ8-3D, along with one of their directors, had been infringing the patent by making and selling systems falling within its scope.  All parties had at one point worked together but, through one reason or another, had fallen out with each other.  To add to the complications, the defendants had also fallen out with each other and gone their separate ways in producing and selling projection systems.

Two of the defendants (C2R Limited and David Dutton) did not dispute that they had done the acts claimed by the patentee, while the other two (Activ8-3D and Simon Humphreys, one of their directors) denied infringement.  Systems argued by Musion to fall within the scope of the patent had been made and installed at various times, but not necessarily by all of the defendants in each case.  It was arguable in at least some of the cases whether there had been an "offer for disposal" or the product had been made, in accordance with section 60(1)(a). The issues to be decided, as far as HHJ Birss was concerned, were whether the defendants were working together and whether two of them (Activ8 and Simon Humphreys) were liable for the acts of the third (David Dutton), but not whether the reverse was true.

A large amount of material in the form of witness statements and other evidence was gone through, which I will not go into in detail.  One key point was that David Dutton had worked with Activ8, but had then (surreptitiously, as it appears to have turned out) gone off to make and sell products under his own new company, C2R.  The question was then whether Activ8, in particular through the actions of their director Simon Humphreys, could be said to be a joint tortfeasor with Mr Dutton through assisting in the installation of any of the products argued by Musion to be infringements.  In relation to one particular installation (the 'Trilogix' installation), Mr Dutton had been assisted by Mr Humphreys, who apparently helped with some woodworking, light stapling and tea making.  HHJ Birss found that, although the installation was directed by Mr Dutton and invoiced by his company, the acts relating to the relevant Pepper's Ghost systems "were carried out pursuant to a common design between David Dutton, Simon Humphreys and Activ8" (paragraph 97 viii)).  The idea that the installation was independent of Activ8 and Mr Humphreys made no sense to HHJ Birss, and he rejected it.  As a result, the acts were carried out such that Activ8 and Mr Humphreys would be liable as joint tortfeasors if these acts turned out to be torts (which, of course, depended on the patent being valid, which was left to be decided).

All of this inevitably led to the defendants being unfortunately unable to extricate themselves from the question of whether they could be liable for infringement, leaving them with little option but to attack the patent itself for being invalid, which I gather they will be doing in the near future.  Fortunately for them, the patent, which has as yet not been tested, appears to be on ground that is not entirely steady.  For those interested in delving further, it is worth noting that a corresponding European application granted last year with narrower claims than the earlier granted GB patent has now been opposed by Activ8.  It will be interesting to see what happens once validity comes into play in the UK.  Given HHJ Birss' track record, it seems likely that the matter will be disposed of before the EPO get going. I suspect that this is one I will be coming back to after not too long.

UPDATE 10 July 2016: Goodness me, things can take an awfully long time at the EPO. Oral proceedings on the corresponding European patent have been scheduled for 28 November 2016.
Posted by Tufty the Cat at 16:32