It is said (although I'm not sure who said it first) that he who represents himself in court has an idiot for a lawyer and a fool for a client.  Thoughts like this can often come to mind when reading some of the decisions that come out of the UK IPO relating to self-represented applicants.  These decisions are, of course, an entirely unrepresentative sample of how self-represented applicants get on.  I am sure many of them manage quite well and end up getting a patent out of the process, although usually with the assistance of a helpful examiner. How useful and enforceable such patents are, however, is another matter (see Opinion 06/06 for a good example of why such patents can be less than ideal).

It is well known that examiners at the UK IPO tend to be remarkably patient and accommodating with applicants without a representative.  You only have to see the difference between how an examiner addresses such an applicant and how the same examiner addresses a representative.  Examiners tend to do helpful things like explaining the law on novelty, inventive step, clarity, added matter and the like, which would be unnecessary to any qualified patent attorney.  They also, thankfully, tend to advise such applicants that they might like to consider getting themselves a qualified representative, typically pointing them in the direction of CIPA.

Sometimes, however, the self-represented applicant just doesn't get it and refuses to engage with the examiner in any kind of constructive way.  A couple of recent cases help to illustrate this point.  The first of these relates to an application filed by VB UK IP Limited, as represented by the inventor Mr Paul Scanlan, the decision relating to which, BL O/415/11, was issued on 23 November 2011.  In his application, Mr Scanlan claimed he had invented a method and apparatus for "determining changes in distance of visual fixation of a person by use of input from the person's respiratory function data" (as stated in claim 1).  The idea behind the invention was described in the application in the following way: 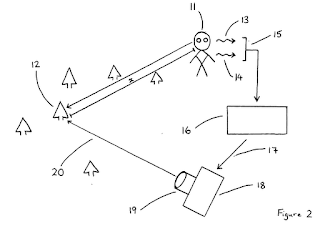 According to the inventor, this relationship could be used to enable auto focus functions on cameras (as shown in the illustration on the left) and for landing aeroplanes, among many other applications.  One problem, however, was that the examiner did not think that the invention was patentable because it related to a scientific discovery as such under section 1(2)(a), lacked industrial applicability under section 4(1) (being contrary to well-established physical laws), and the application contained insufficient information for a person skilled in the art to perform the invention, according to section14(3).  The applicant disputed all of these, and argued at the hearing that his theory was correct.  The following paragraph of the decision paints an interesting picture of what went on before the hearing officer:

“To demonstrate his theory, Mr Scanlan hummed while looking from one finger to another, the fingers positioned at two different distances from his eye, and the tone of his hum changed. This, he asserted, showed a link between the respiratory system, and the distance of visual fixation.”

The hearing officer was, unsurprisingly, not persuaded and considered that this did not provide evidence that there was in fact any link.

Not to be put off, Mr Scanlan also provided evidence in support of his theory, which included a reference to a contestant on the ITV show “’s Got Talent”, Antonio Popeye (pictured right).  As the hearing officer put it, 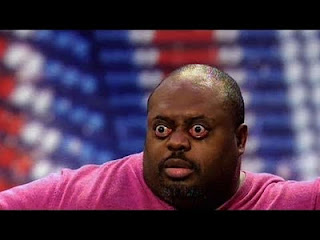 “This is a gentleman who appears to be able to make his eyeballs “pop” out of his skull. This effect, according to Mr Scanlan, is achieved by Mr Popeye having excellent control over the pressure in his respiratory system and how it affects his eyes. Again, there is no evidence that this effect is not simply down to good control of the facial muscles and/or extrinsic eye muscles.”

Considering all the applicant’s evidence, the hearing officer concluded that there was no “credible evidence to support the applicant’s theory over and above what are considered to be well established medical principles” (paragraph 24), and there was therefore no reasonable prospect of Mr Scanlan’s proposals being accepted even under trial conditions with experts available to give evidence (a reference to the requirements for refusing an application on section 4(1) grounds following the decision in Blacklight Power).  The application therefore lacked industrial applicability.

The hearing officer also found the application to be insufficiently disclosed, under section 14(3), “due to a lack of information concerning the apparatus which should be used to obtain respiratory function data, the conditions under which that data should be obtained, and a lack of information concerning how any data obtained would then be used to derive a visual fixation distance” (paragraph 32).  The application was, unsurprisingly, refused.

It appears to me that Mr Scanlan’s invention would be doomed to failure even if the applicant was represented by a qualified attorney (and had enough money to take his application through to a hearing).  In another recent example, however, I am not so sure that the eventual outcome would have been the same.  This was the case of Henri Duong, BL O/422/11, this decision being issued on 25 November 2011. 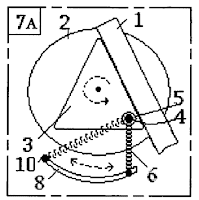 Mr Duong filed his application in January 2008, claiming priority to three previously filed , French and applications. The application (published as GB2448392) related to an automatic braking system for preventing a vehicle from colliding with obstructions (an exemplary embodiment illustrated on the right).  The claimed invention was drafted in what could be described as an unconventional (not to say incomprehensible) style, claim 1 as filed reading as follows:

The examiner identified several prior art documents relating to automatic braking systems, and objected that the claims were unclear in several ways and that the invention as claimed was not new.  There then followed what the hearing officer described as a “vast amount of correspondence between the examiner and the applicant which has not done much to progress the application towards grant”.  In this correspondence the examiner repeatedly raised fundamental objections to the application, which were repeatedly ignored by the applicant.  Along with the original clarity and novelty objections, added matter objections were raised, as a result of the applicant filing new claims having no clear basis from the application as filed.  The examiner's report from March 2009, responding to the applicant's three previous replies, is a model of calm restraint combined with helpful advice:


"In your letter of 14 November 2008 you state that adding matter to your application should be allowed.  My job is to guide you through the law so that you can obtain a valid patent. Whether you or I agree with the law doesn't matter, the important thing to note is that a patent that does not comply with the law will not be granted. Added matter is not allowed and as such I am unable to grant a patent containing any information that was not present at the date of filing. [...]

You need to submit a response to the report I sent you on the 12 May 2008. You should read though all of the patents I sent you and find a feature of your application (as filed, not adding any matter) that is not shown in any of these documents and put this feature at the end of claim 1 that you filed on 26 February 2008. Then you should write me a letter discussing each of the patents I have listed and telling me why your new claim 1 is different from these patents (this need not be longer than a few sentences for each patent listed). This will be the first step in the process of obtaining a granted patent for your application, but until this step is made I am unable to grant you a patent."

Unfortunately, Mr Duong failed to respond constructively to any of the advice offered.  To add to the clarity, novelty and added matter objections, the applicant then prompted a further one of plurality of invention through making more amendments.  After another couple of reports, the examiner then suggested that he might like to consider seeking advice from a patent attorney. Yet further amendments then prompted the examiner to add insufficiency to the growing list of objections. Going above and beyond the call of duty, the examiner even suggested a draft set of claims that he considered would overcome all existing objections. The applicant, unsurprisingly by that point, failed to take up the offer and a hearing was then held, although without the applicant appearing in person.

The hearing officer reviewed the outstanding objections and agreed with the examiner, concluding that "it is abundantly clear to me that a patent cannot be granted for it in its present form". The compliance period had by then expired, so the hearing officer considered whether it would be worth offering the applicant a further opportunity to amend the application to  overcome the objections. He concluded, however, that "the application has not moved in the right direction and nor has Mr Duong shown any inclination to heed any advice on how to advance it towards grant despite the countless opportunities that have been given to him. I do not consider it appropriate to offer him a further opportunity to do so now". As a result, the application was refused for failure to comply with the requirements of sections 14(3), 14(5)(b) and 76(2) at the end of the compliance period.

It is clear that Mr Duong could have obtained a granted patent even without the help of a representative if only he had paid attention to the assistance offered by the examiner.  I can only wonder therefore whether he even realised what he was trying to do, as all opportunity of getting a patent in the UK for his invention now appears to be lost (assuming that no appeal is being filed). I am not sure what, if any, lessons there are to be learned from this case, but it does appear to me that sometimes the IPO goes beyond what could be considered to be reasonable in providing help to applicants without asking for anything in return, although even their patience does eventually run out. The inevitable question as I see it is whether the IPO is doing the right thing in treating unrepresented applicants so differently. Since everyone has to comply with the same legal requirements, whether or not they are represented, is this entirely fair?
Posted by Tufty the Cat at 16:51