As every European patent attorney knows, clarity is not a valid ground of opposition. This does not, however, stop oppositions being filed using sufficiency (Article 100(b) EPC) as a disguise for what would otherwise be a clarity objection. The usual outcome of such an attempt is to cause a bit of trouble for the patent proprietor, but for the opposition division to then dismiss the argument as being unallowable. It is, however, sometimes difficult to separate sufficiency from clarity, as they are to some extent linked together. While clarity relates to the claims being clear and concise and supported by the description (Article 84), sufficiency relates to the application disclosing the invention in a manner sufficiently clear and complete for it to be carried out by a person skilled in the art (Article 83). If the claims are not clear, and the application does not help to clarify them, then an argument could be made that the skilled person could not reproduce the invention.

In the UK, following the case of Biogen v Medeva in 1996, the law regarding sufficiency is further entwined with clarity, resulting in two types of insufficiency. The first 'classical' type of sufficiency relates to the skilled person being able to reproduce the invention, given the teaching of the application as a whole and the skilled person's common general knowledge. This corresponds most closely with Article 83 EPC. The second type of sufficiency, which is known from the case as Biogen sufficiency, relates to the skilled person being able to reproduce the invention over the whole scope of the claim. Biogen sufficiency is really then about support in the description, which in UK case law relates closely to whether a priority claim is valid. In the disputed patent in the Biogen case, which related to a DNA sequence for causing a cell to make antigens of the hepatitis B virus, the scope of the claim covered the invention as applied to prokaryotic and eukaryotic cells. The priority application, however, only disclosed the invention as applied to bacterial (i.e. prokaryotic) cells. The House of Lords, following Lord Hoffmann's opinion, found that this resulted in the application not being entitled to priority. As a result, the patent was found to be obvious over an intervening disclosure.

It should now be reasonably clear that Biogen sufficiency does not translate well to opposition proceedings at the EPO, because it is tied up with other issues such as clarity and priority. If arguments of the type raised in Biogen v Medeva were raised during opposition, a counter argument would be that these relate to clarity rather than sufficiency and should therefore be dismissed. This did not, however, stop the opposition division in the case of proceedings relating to EP1767375 from raising Biogen sufficiency as a ground for revoking the patent.

The invention in question related to a tape drive for a transfer printer (like the one shown here from Videojet), in which tension on the tape was monitored and maintained between predetermined limits by controlling motors driving a pair of spools. Claim 1 did not specify how the tension was measured, but claim 3 provided means to monitor power supplied to the motors, and claims 4 and 5 provided further detail on how the power was measured. If all this seems vaguely familiar, this is because the case related to a patent that was revoked in the UK in the case of Zipher v Markem in 2008, which was only one of a number of cases involving these parties. The opposition proceedings against Zipher's European patent (since transferred to Videojet Technologies, Inc.), which were initiated around the same time as the court proceedings in the UK, have taken a whopping seven years to complete, with the final appeal decision in T 1727/12 issuing last month.

At the conclusion of the opposition in July 2012, the opposition division's sole ground for revocation was sufficiency, as summarised by the following paragraph in the grounds for the decision: 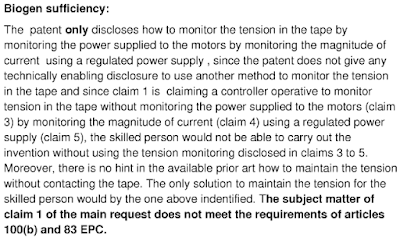 The patent proprietor appealed against the decision, arguing that it was not clear what the OD meant by 'Biogen sufficiency' (although their representative, being a UK based patent attorney, would obviously know what it meant under English law). More importantly though, they argued that the objection was without  foundation on the facts of the case. Although claim 1 was broader than the specific description, the skilled person would, the proprietor argued, easily be able to realise the invention using the specification and common general knowledge.

As the Board of Appeal put it, the OD had distinguished between 'classical insufficiency' and 'Biogen sufficiency'. They had found the invention to be disclosed sufficiently clearly and completely for the skilled person to carry it out, thereby fulfilling the classical sufficiency requirement under Article 83. What they had considered the invention to lack though was sufficiency in the sense that the skilled person would not be able to carry out the invention over the whole scope of the claim, since the patent did not disclose other ways of carrying out the invention than those defined in the dependent claims. The Board considered, however, that Biogen sufficiency, as defined by the UK House of Lords, related to Article 84 EPC and not to Article 83, given that the underlying purpose was the requirement for support by the description to ensure that the patent monopoly was justified by the actual technical contribution to the art. The Board was not convinced that the OD had justified the use of Biogen sufficiency in relation to Article 83, and concluded that they had not shown that the patent failed to comply with Article 100(b). Since there were other issues that were left open, including novelty and inventive step, the Board remitted the case to the OD to take a look at these.

What made the OD in this case pull Biogen sufficiency out of the hat to justify revoking a European patent is a mystery to me. Even if it was relevant to the case, using a principle of a national court in proceedings at the EPO is to say the least a bit unconventional. It also looks as if the OD did not even understand what the principle was about. As well as establishing that Biogen sufficiency is not something that should be used in EPO oppositions, the case demonstrates that sufficiency arguments at the EPO, whether raised by the opponent or the opposition division, should be a bit more substantive than simply arguing that the skilled person would not be able to do the invention in another undefined way. Such arguments should rightly be dismissed as being invalid grounds of opposition.
Posted by Tufty the Cat at 16:38