A few apparently unconnected things I noticed over the past few weeks made me think about a theme connecting them. In short, how can we tell whether a patent is good or bad? The first thing I spotted that made me think of this was an article on LinkedIn, which argued that the patent system suffers from an "expert service problem", where the situation is too complex for the non-expert to understand. This results in, among other things, a lot of poorly drafted patent applications that are too narrow and effectively worthless from a business perspective. This may be true, but the immediate question I had was: who gets to judge this? Just because a patent ends up being granted with narrow claims doesn't mean that it is worthless, nor does it mean that it was necessarily badly drafted. Often it is just that this is all the applicant could have reasonably expected to get. Provided the patent at least covers the invention that is being commercialised, together with any obvious variants, that would normally be a fairly good outcome. One can always do better, and in my view it is always better to get the applicant to properly understand at least claim 1 when the application is being drafted. This takes bit of education, and doesn't necessarily happen straight away but, once your client is on-board with how claims are constructed and what they mean, there is much less of an expert service problem, because the client understands enough to know what they are paying for. A problem with judging after the fact (ex post facto, as the EPO would call it) is that a patent could be considered poorly drafted in hindsight, but this doesn't say anything about how things could actually have been done differently from the outset without that hindsight knowledge. This leads me on to a couple of examples where there could be at least questions raised about whether a patent was well drafted, but in each case looking at the patent alone misses the point.

The first example relates to a company called Juicero, which has been featured quite a lot in recent news. Juicero has received over $100 million in venture capital funding to develop a juicing press that works solely with pre-prepared juicing packs sold exclusively through Juicero. The business model is that, once you buy the juicing press (priced initially at $699, recently reduced to $400), you have to get your supply of juicing packs from Juicero (costing between $5 and $8 each). This model seems to be similar to Nespresso's, as it depends on the consumer being hooked into buying consumables only from the supplier of the machine. As with Nespresso, it depends on having strong protection for the consumable pack, without which it would not be possible to prevent competitors supplying packs that would also work with the machine at a lower price. As we have seen with Nespresso, once the patents for the coffee pods expired it became impossible to stop competitors selling compatible coffee pods. A 20 year period of patent protection can, however, give a company plenty of time to build up their market before this happens. As you would expect, this is exactly what Juicero have done. A set of claims filed last year at the EPO, which have been considered to be allowable and should therefore be granted soon, claim the juicing pack in the following form:

Although the claim seems to be fairly narrow, it certainly covers the basic essential requirements of the Juicero pack, and would make it hard for a competitor to make a compatible pack without falling within its scope. The claim therefore seems to do the job, in that it serves the purpose of preventing others selling the same juice pack without infringing.

Getting a patent, however, is not enough. The business also needs to be viable. To justify their very large investment, Juicero would need to get lots of people to buy a machine and then buy, and keep buying, their juicing packs. This is where the problems seem to start. The first problem is that the juicing machines are very expensive. A breakdown of a machine here explains why this is. The main reason seems to be that it is extremely over-engineered. The basic job of the machine is just to apply pressure to a bag, but the machine has been engineered with all kinds of extra features that appear to be superfluous or just totally unnecessary. The machine would need to be very much simplified to bring the price down, unless Juicero try to sell the machines at a loss to encourage users to buy the juice packs. This, however, is where the second problem starts. According to an article on Bloomberg, two investors in the company were "surprised" to find out that the company's own juice packs could be squeezed by hand to get practically the same result in terms of the amount of juice out of the pack, apparently making the press entirely unnecessary. This caused a great deal of fuss, resulting in lots of mocking of the company and their investors, and prompted Juicero's CEO to issue a statement arguing for the advantages of the company's products. Possibly the most ridiculous argument justifying the machine was that the "closed loop food safety system allows us to remotely disable produce packs if there is, for example, a spinach recall". This refers to the ability of the machine to read a code on a juice pack and, since the machine is connected to the internet, decide whether the pack is a good one. As far as advantages go, stopping the consumer from using the product is not much of one. In any case, if the machine refused to press a pack, the user could always just squeeze it by hand. The only real advantage of the machine seems to be about the same as that of an automatic toothpaste dispenser (see picture), which can be bought for much less than $400 and, of course, can use any toothpaste tube. 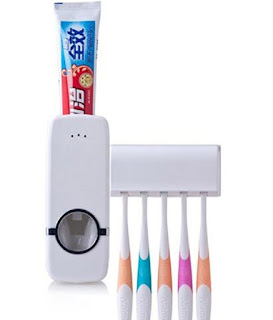 In this case therefore, while the patent claim seems solid and would serve the purpose asked of it, the business model seems to be fatally flawed. I would be very surprised to see Juicero surviving long enough to justify its apparently very high price.

The other example is about honey rather than fruit juice, and relates to a new type of beehive that allows honey to be tapped from the hive without having to remove the combs. The invention, known as Flow Hive was developed by Australians Stuart and Cedar Anderson, and is the subject of various patent applications, such as this international application. The invention in this case aims to solve a well known problem with beehives, in that the combs have to be removed and processed to remove honey from them. The Flow Hive instead allows the combs to be split while still in the hive, allowing the honey to run out of the hive through a pipe (see picture). This clearly solves a technical problem and, provided the claimed invention is new, would seem to have no problem being patentable. Claim 1 currently on file at the EPO, which is probably allowable, reads:

Again, the scope of the claim seems on the face of it to be quite good, and covers the key feature of the invention. A measure of how good the invention is though is that Flow Hive is already facing potential competition from another company, known as Tapcomb, which seems to be developing a very similar hive. Flow Hive say that this would be an infringement (although it seems to me to be impossible to tell without details of the competitor's hive construction), and are already indicating that they will enforce their rights against infringers, which you would expect them to.

Both Flow Hive and Juicero have patent protection that would cover their core business model, but this is where the similarities end. While Juicero have patent protection for their juicing packs that is aligned with the business model, it seems very unlikely that anyone would want to bother infringing (UPDATE: It seems I was wrong on this point. Juicero are tackling a Chinese company selling a system apparently very similar, although the extent to which this is really a patent infringement case, rather than passing off, is not clear). Flow Hive, on the other hand, have patent claims that protect their product and the product is apparently so good that others are already wanting to copy it. Provided their patent protection is sufficiently strong, they should be able to stop infringers and be able to build up their business that they have already put a lot of effort and money into, demonstrating the whole point of having a patent system.

In conclusion, while it is important that any patent you seek to get for your product is properly prepared and prosecuted, it is also vitally important to have a viable business proposition. A patent that covers something that nobody wants to buy is of course ultimately pointless. A patent for a product that others want to copy is clearly much better. While it seems fairly easy to see from these two examples which is which, this is only really possible with a degree of hindsight. Going back to the question I posed at the beginning, it really isn't possible in most cases (although there are of course exceptions) to tell whether a patent is good or bad, at least not without seeing the wider context.