A Prolific, and Persistent, Inventor

The name Michael Oluwaseun Bamidele has come up several times over the past few years while I have been reviewing decisions each month from the UK IPO for the CIPA Journal. The latest one (BL O/746/22), which issued just last week, prompted me to take a closer look at what Mr Bamidele has been doing. The latest decision is one of eight issued since 2014 relating to UK patent applications filed and prosecuted by Mr Bamidele. All but one of these decisions, including the latest one, unfortunately resulted in refusal. You might think that this would not demonstrate a particularly good track record for an inventor, but it turns out Mr Bamidele has managed to get five applications granted so far by the IPO out of a total of 16 filed since 2010. The technology fields for these patents are quite diverse, covering cellular communication (GB2476705B), object location (GB2476850B), domestic waste recycling (GB2476937B), holographic projectors (GB2477508B) and a human-powered electrical power supply (GB2523853B).

According to his LinkedIn profile, Mr Bamidele is the Founder and Product Owner of Dorex Technologies Ltd, which claims on its website to be "a UK based company offering unique solutions and a variety of services". Mr Bamidele introduces his company in the following video.

Another video below from Mr Bamidele describes a "Green Hover Vehicle Solution", which is described in GB2552190A. The vehicle apparently removes the need for an internal combustion engine by using magnetic repulsion to levitate over a road surface and air turbines to provide propulsion. Figure 1 of this revolutionary patent application is reproduced below. 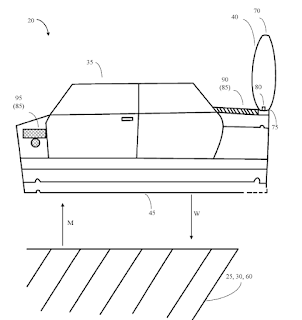 Mr Bamidele and his company, which according to him is worth £600 million (based on a £15M investment for 2.5% of the company - see video above), appear to be very much underappreciated. His achievements in obtaining patents at the UK IPO, apparently entirely without the assistance of a patent attorney, are outstanding. I very much look forward to seeing what he achieves in the future. Perhaps we have another Arthur Pedrick in the making, although such a comparison at this early stage in Mr Bamidele's patenting career may be slightly unfair, especially since Mr Bamidele does not appear to own a cat.