The name Halliburton should be familiar to all those who have been keeping an eye on developments in excluded subject matter issues over the last few years.  The name is associated with an unusual case from 2005, Halliburton Energy Services, Inc. v Smith International (North Sea) Ltd [2005] EWHC 1623 (Pat), in which Pumfrey J decided that a claimed invention that would otherwise fall foul of the exclusions of section 1(2) of the Patents Act could be remedied by adding a manufacturing step. The inventions in that case related to methods of designing a drill bit for use in the type of drilling used in oil exploration. The methods were carried out using computer simulations, and resulted in an output drill design of sorts but not an actual drill bit. Although the patents in question were found to be invalid for a lack of sufficiency, one of Pumfrey J's findings was that if they had been found to be sufficient their further problem with covering unpatentable subject matter could have been remedied by adding a manufacturing step to the claims. 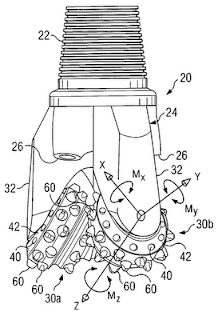 Halliburton have now appeared again with further inventions relating to methods of designing drill bits, this time in a recent decision from the UK IPO (BL O/080/11).  In this decision the hearing officer concentrated on one of the three applications in question, as all had similar issues to address and all had been objected to by the examiner under section 1(2).

The application, GB 0523735.9 (published as GB2420433), related to a method of designing roller cone drill bits used for forming wellbores in subterranean formations, in which a computer simulation of interactions between the drill bit and the material being drilled was used to optimise various design features of the bit, thereby reducing or avoiding the need for extensive field testing. The method involved an iterative design process performed wholly within a computer, in which a simulated test was performed regarding whether the drill bit resulting from an iteration of the design parameters being considered was optimised, the method stopping once optimisation was determined to be achieved. The examiner, relying on the previous decision in Halliburton Energy Services v Smith International [2005] EWHC 1623 (Pat), had objected to the claimed invention as being a method for performing a mental act as such, although considered that the claims would be allowable if they included a final step of manufacturing the drill bit.

Following the Aerotel/Macrossan four step test (see paragraph 40), subject to the clarification provided by Symbian, the hearing officer determined that the actual contribution was that of a method of designing drill bits that included simulation of the performance of the drill bit based on calculating a three dimensional mesh for each cutting element and for the earth formation, and using that to determine the forces acting on each mesh segment of the cutting element, determining the forces and stresses acting on each element. As with the invention in Halliburton, the invention in question was concerned with a method of designing a drill bit. Pumfrey J's reasoning as to whether the invention related to excluded subject matter referred to the EPO decision in T 453/91 (IBM), in which a method of designing a semiconductor chip was deemed to be allowable provided a final step of manufacture was added to the claims in order to 'tether' the claims to an industrial activity.

The applicant argued variously that the present invention differed from that considered in Halliburton, that the mental act exclusion had been too broadly interpreted and subsequently doubted by the Court of Appeal in Aerotel, the comments regarding 'tethering' by Pumfrey J were obiter dicta and in any case wrong in light of the later decision in Astron Clinica [2008] RPC 14, and the judgment was no longer good law in light of the more recent EPO decision in T 1227/05 (Infineon; see the IPKat here for a post on the case).

The hearing officer considered that, although the contribution of the invention differed from that in Halliburton, the invention was still a method of designing a drill bit based on certain selected criteria using simulation. The inclusion of three dimensional mapping might make it a better method of designing, but did not itself provide a relevant technical contribution. The contribution was therefore no more than a scheme for performing a mental act. Providing an additional step of outputting the results to a resource would not change this, regardless of the form in which the results were output. The hearing officer further considered whether Halliburton remained good law. Leaving aside the issue of 'tethering', the later decision of Pumfrey J in Bloomberg [2007] EWHC 476 (Pat) (which post-dated Aerotel) indicated that the invention in Halliburton would still be excluded under the four-step Aerotel test as a scheme or method for performing a mental act.

Regarding any doubts expressed by Jacob LJ in Aerotel (see paragraph 118) regarding the mental act exclusion being over-broadly interpreted, any such comments were considered to be obiter and therefore not to be followed in preference to Halliburton. Regarding the 'tethering' point, the hearing officer considered that there was some force in the argument that adding a manufacturing step did not make an otherwise unallowable claim allowable, as this could elevate form over substance. There was consequently some doubt over whether adding such a step would make the claims allowable, although this point was not decided as no such amendments were proposed by the applicant. Regarding the more recent EPO Board of Appeal decision in Infineon, the hearing officer considered that EPO decisions were not binding, although could be persuasive, and that Halliburton remained a binding decision regardless of the developments in EPO case law. In summary, the hearing officer found the contribution to fall solely within excluded subject matter and refused the application.  Similar decisions were then made regarding the other two applications in quick succession, for the same reasons.

This decision is one where it appears everything possible has been thrown into the mix, including the use of a renowned barrister, which is unusual (although far from unheard of) in IPO hearings.  The arguments come down to one of the key areas in which the UK IPO now clearly differs from the EPO when it comes to considering excluded matter under section 1(2) (equivalent to Article 52(2)-(3) EPC), and highlights the difficulty in implementing in the UK what has been a significant change in EPO case law following Infineon, given the binding nature of English precedents.  It seems that, as with Vicom and IBM in previous times, the decision in Infineon will need to be taken to the courts in order to establish a precedent sufficient for the UK IPO to follow.  I wonder whether this will be the one to do it, and whether it could even be taken further to resolve the outstanding issues over G 3/08, which is currently being studiously ignored for the same reasons in decisions by the UK IPO (see here for a good example). Perhaps this would be asking too much though.
Posted by Tufty the Cat at 21:41