Virgin v Premium - yet another chapter

The dispute between Virgin Atlantic Airways and Premium Aircraft Interiors has been rattling along for a while now, and has been keeping various patent attorneys, solicitors, barristers and bloggers quite busy.  Other chapters of the story involve decisions from the High Court and the Court of Appeal (a good starting point if you are interested in finding out more is this IPKat post), as well as proceedings before the EPO.  Even the Supreme Court will apparently be having a go at the matter, having granted Premium leave to appeal earlier this year. 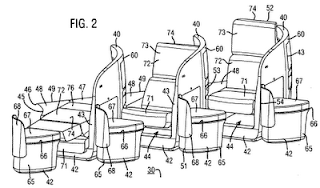 The story relates to European patent EP1495908 concerning an aircraft seating system (right).  The patent was granted in 2007 to Virgin and designated the UK, along with various other European countries. The patent was opposed by Cathay Pacific, Airbus and Premium. The patent survived the opposition and subsequent appeal proceedings, although in an amended form. A decision to maintain the patent as amended was issued yesterday following the decision by the appeal board in T 1259/09, and a B2 publication is due to appear soon.

One argument raised by the opponents during the EPO proceedings was that the European patent should not have been granted with a GB designation, because the request for grant included the following statement (click for a larger version):

The examining division had nevertheless allowed the application to proceed to grant with the GB designation intact.  Both the opposition division and the appeal board concluded that there was nothing they could do, since the ability to correct any such errors was only in the remit of the examining division, and since Premium was not a party to the proceedings before the examining division and not entitled to appeal.  The GB designation therefore stood. There was nothing further the opponents could do, so the only options left for them was to fight the patent in each country, which at least Premium continues to do.

Premium have now had another go at trying to get the GB designation removed, this time through the unusual step of applying for a correction under Rule 50 of the UK Patents Rules 2007.  A decision relating to this request, which resulted in a hearing at the IPO, has now been issued: BL O/281/11.  Premium argued that, since the UK was expressly excluded as a designated state by the applicant, no European patent (UK) ever existed and therefore the UK register should be corrected to reflect this.  According to Premium, nothing that Virgin or the EPO did subsequently could change the fact that there had never been a GB designation, and any suggestion that there was an EP(UK) was an error that should be corrected insofar as it appeared on the UK register.  They put forward the case of Arrow v Merck [2007] EWHC 1900 (Pat) in support of their argument, as this related to a correction being made to remove a GB designation following grant by the EPO. However, as the hearing officer noted, in that case the EPO had realised there had been a mistake and issued a corrigendum afterwards.

The hearing office pointed out that the difference in this case was that the EPO had not considered there was anything it could or would do, even if it considered that there had been a mistake.  For the comptroller to come to a conclusion that any error had been made that could then be corrected, it would be necessary to look afresh at the facts considered previously by the EPO examining division and effectively come to a view on the validity of what had been done.  This would, the hearing officer considered, amount to a review of a determination by the EPO which, particularly in the context of an ex parte request for correction of the register, was not open to him. In contrast to the provisions governing revocation on patentability grounds, the comptroller had been given no power to review decisions made by the EPO, and the hearing officer could not see how he could have any sort of power to do so under the UK Act and Rules. Because there was no basis on which a correction could be made, the request was refused.
Posted by Tufty the Cat at 16:58