The laboratory technique of Polymerase Chain Reaction (PCR) will by now be well known, at least in principle, to most people from its extensive use in testing for a particular virus. In very simple terms, PCR is a method of amplifying a DNA target sequence through repeated heating and cooling cycles that amplify the target sequence until it reaches a level high enough to be detected. PCR can therefore be used to detect extremely small amounts of a particular sequence, provided enough cycles are used. As the inventor Kary Mullis put it, "you can find almost anything in anybody" (see here). How many cycles are used is therefore critical to how much reliance you put on the results, particularly if you are using it to diagnose the presence of a virus (the RNA sequences being converted to DNA for RT-PCR testing).

To have confidence in the results, a PCR machine will need calibrating and validating to ensure that the thermal cycling is accurately and repeatedly carried out and that the amount detected after each cycle is accurate. If this is done properly, the technique can be used to establish quantitatively as well as qualitatively what was present in the original sample, i.e. not just whether something was there but also how much. 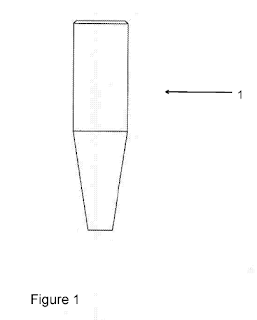 Fluorescent dyes can be used that allow measurements to be made that correlate the amount of the detected substance with a fluorescent response, which allows an instrument to be calibrated and validated so that it can be known how a measured response corresponds to an amount of material present. Such dyes might, for example, be used in the form of a standard solution put in a PCR machine to establish a calibrated level.

GB patent application 1421819.2 disclosed the use instead of a fluorophore suspended in a thermoplastic polymer matrix, for use in PCR validation. A PCR tube made of the polymer (shown here on the right, the sole drawing in the application) with a fluorophore suspended in the polymer, allowed a spectrometer to detect a known level of fluorescence so that the PCR machine could be validated. Claim 1 of the application as filed read:

The examiner objected that the claimed invention lacked an inventive step, given that suspended fluorophores were known and the choice of polymer was obvious. The applicant was unable to get over this and the issue came before a hearing officer at the UK IPO.  By this stage, claim 1 had been amended to add a few more features:

The examiner still objected that the claimed invention lacked inventive step because it was known to use fluorophores to validate a PCR machine and the choice of polymer was obvious, all of them being well known polymers. What neither the examiner nor the applicant argued though, at least until they were prompted to by the hearing officer, is whether the feature of the "thermoplastic matrix is cut to the shape of a PCR tube" was significant. The hearing officer looked through the two documents cited by the examiner and concluded that neither document actually disclosed a thermoplastic polymer matrix, in which a fluorophore is suspended, being cut to the shape of a PCR tube. Based largely on this, the hearing officer found that the skilled person would not be motivated to provide such a PCR tube based on the documents. The claimed invention was therefore not obvious and the application sent back to the examiner to conclude proceedings.
The lesson to be learned from this should be obvious, which is that you should always take care to check what it is you are claiming as the invention and argue on the basis of any and all differences over the prior art. It really shouldn't be necessary to rely on the examiner or a hearing officer to do it for you.
Posted by Tufty the Cat at 16:27