I get quite tired of reading decisions from the UK IPO each month on section 1(2), largely because there are so many of them and they tend to follow the same basic structure, which is:

The stream of applications following this route and being refused as a result has been pretty steady for the past few years, with usually a handful each month. Occasionally there will be a different result, where the applicant has managed to pull out a technical effect that persuades the hearing officer there is something there after all, but these are few and far between and do not affect the general procedure of how borderline cases are assessed. Every so often though, there is one that bucks the trend and comes up with something potentially interesting. There was one last month that I thought interesting enough to comment on, which related to applications in the name of Imagination Technologies Limited (BL O/420/21).

The applications (there are several) related to a data processing system for determining median values for a stream of data, in which intermediate values were used to allow values already calculated to be used in calculating a subsequent median value, somewhat similar to calculating a rolling average. The applicant had already managed to get one application granted (GB2587590B) to this way of calculating median values for a data stream that was specified as being audio samples of an audio signal or signal samples of a transmitted signal. They also, however, filed three divisional applications to versions of a more general system that was not specifically linked to what the data represented. The difference was in how the invention was claimed, in that the divisional claims included much more specific detail about the system being embodied in hardware on an integrated circuit. The extent of disclosure in the applications of the type of hardware used was limited to the (fairly usual) way of representing hardware, the most detailed one being in Figure 7, shown below. 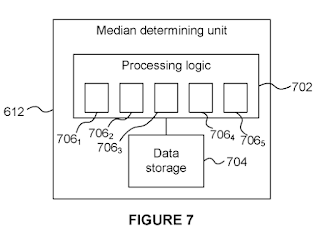 The examiner had objected that the way the invention was claimed did not make any difference, and considered that the invention was not allowable because the type of data stream was not specified and the claims had not therefore been 'tethered' to the real world. This, of course, brings to mind the well-established case law dating back to Vicom (T 208/84) at the EPO, which is still being followed at the EPO and UK IPO. According to this case law, provided the data being processed relates to something technical, for example an image (in the case of Vicom), it is possible to be patentable if the method is new and inventive. If this is the case, it does not matter what form the invention is claimed, and claims to computer programs themselves, in whatever form, are also allowable provided they have this 'further technical effect'. Following this principle, it should be clear that it would not make an invention patentable just by specifying that it is embodied on hardware. The Court of Appeal decision in Gale's Application [1991] RPC 305 makes this clear in the UK too.

In this case, the applicant argued that the invention was technical because it was specifically embodied in hardware and was not therefore a computer program or a mathematical method as such. The hearing officer tended to agree with this and thought that the application did point towards a hardware implementation, largely because the claimed inventions referred to "fixed function circuitry" and "dedicated hardware", which in the hearing officer's view meant the same thing. The invention had therefore to be construed as a piece of hardware and not a computer program.

On the mathematical method question, the situation was complicated by Gale's Application, in which a ROM was programmed to perform an improved square root calculation method. Substance should rule over form, according to the Court of Appeal, and this could not be enough to escape the exclusion. Nevertheless, the hearing officer agreed with the applicant that, because the invention was in "fixed function circuitry", its implementation was not conventional and was not simply a generic ROM including programmed instructions. This was enough to distinguish it from Gale. This got the application over the line and the remaining steps in Aerotel and AT&T/CVON were passed, resulting in the claimed inventions being allowable.

There was, however, a twist in the tale. Before sending the applications back to the examiner to get them allowed, the hearing officer noticed that there were still claims in the applications directed to a computer program that would cause the integrated circuit to carry out the claimed method. Rather than finding that this would entirely contradict the applicant's arguments that the way the invention was implemented was specifically on dedicated hardware and not on a computer program, the hearing officer instead simply stated that these claims had to be deleted.

This is only a decision of a hearing officer at the UK IPO and therefore not precedential. Further decisions may well disagree with it. It does, however, suggest that applications directed to what are in reality mathematical methods embodied on software could be patentable in the UK if they are described as being specifically implemented on hardware. This tends to go against everything that I have seen on this subject since I first started looking, but I expect there will now be others that will want to have a go at the same kind of arguments. Let's see how that works out.